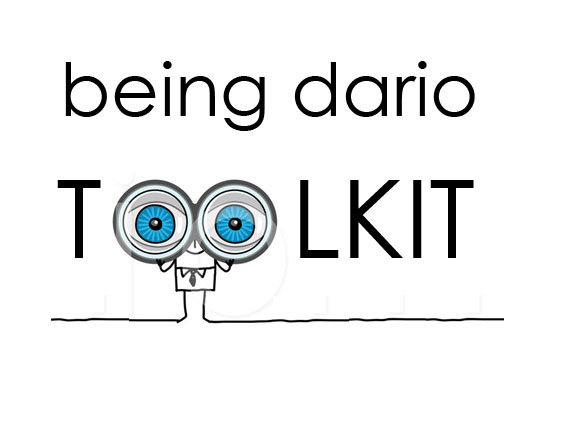 In these days I posted the video on youtube Being Dario.
The draft idea came after the dust raised by the icebucketchallenge. I wrote for this website site a very critical article that I have avoided posting because I was not convinced myself of some of the criticisms that I raised.
But that’s another story.

With Being Dario I try to make others understand how I see. At least partially.
There are several videos that try to show how people with retinitis pigmentosa sees . Most of these show the images inside a circle surrounded by black.
In fact already the camera itself films a small area compared to what the human eye sees, so the circle in a black field is a further restriction to give the idea that those who have retinitis sees a limited portion of the image.
I tried to add the humorous approach, despite the incidents and the apparent unfriendlyness are facts.
Finally a short tutorial suggests how to try to see like me.
Just get two tubes of toilet paper in front of the eyes, maybe bring them closer to the center in order to avoid the splitting effect and you are done.
The same trick has been used for filming, putting a tube in front of the lens.

But then so I see black around the small circle?
I answer with a question: do you see black behind you?
It is obvious that the answer is no, simply you do not see.

I recommend everyone to try to get those glasses that can be built with the toolkit and try to carry out normal daily activities. Cooking, cross the street, take a tram …
You will be surprised to note how difficult it is.

IF YOU DO IT SEND ME THE VIDEO 🙂

Obviously I’m used to and those who try for the first time will find it much more difficult, but in certain situations it is.
I could list hundreds of examples and situations where not to see beyond that limited area is due to misunderstandings, frustrations, dangers.
That’s not the point, what I try to convey is that I simply see differently, with a different point of view.
I hope to create soon a short video illustrating the reduced night vision and reduced hearing ability, though the latter is very close to normal when I use hearing aids.
And now, share the video among your friends, the more the awareness the less the difficult situations and those who I will not wave back will make sure to #getonmyway
We all have limitations, some are recognized as a disease, other as disabilities, but to have limits is a way to remark who we are.

2 comments from the community