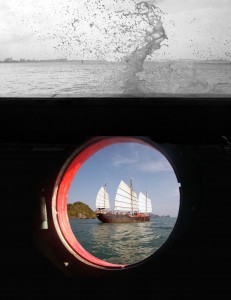 But you, what you see?
I’ve been asked many times. Probably they were curious. Who does not know the disease, but in any case who encounters a patient with retinitis pigmentosa is easily wondering what he sees, how he sees.
Clare and I were walking down the street, during daytime, she knew nothing about the disease.Towards evening we entered a bar and I immediately had troubles. I stopped at the entrance to wait for my eyes to get accustomed to the darkness, or at least the difference in lighting. After a while I began to recognize the environment and I saw that Clare was beside me, staring at me and did not understand why I stopped. We took place and I answered the question that she did not know how to formulate, but which was clearly on her face.
So I made her aware of the whole thing, retinitis pigmentosa, night vision, visual field.
I did not say that I have Usher Syndrome.
I usually do not say at the first meeting. It makes me feel too bad
After a while, here comes the big question.

How much do you see?

I always do the same demonstration to show how I am able to read without glasses what that she does not see if she takes hers off. The diopter still resist well.

However, I am shortsighted, longsighted and astigmatic and even if I wear glasses (which I do not wear any more because I’m tired) I could never see 10/10. I would get barely up to 7.
But this is not the point. 7 / 10 would be sufficient to see a step, a tree, a curbstone.
The consequences of retinitis pigmentosa are others. 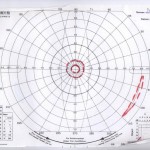 If you look at the print of a filed view examinations of those who suffer from retinitis, you may notice that the areas that show which parts of the filed are still visible in some cases are very small, usually central. This is why it is the vision of a retinopathy it is often described as if seen through the porthole of a boat.

The effect is more or less the same, but in reality we are not aware of seeing so little, because we do not see the black outside the circle. In practice, when you look out a porthole you see only a portion of the landscape, but one also sees the inner wall of the plane or boat, which will appear dark maybe, but part of what you see.
a better exercise may be to put two cardboard tubes (like those of toilet paper) in the eyes and try to do the everyday actions in this condition.
In this way to see an object it is necessary that enters the field of view. To look for the fork on the table may be necessary to scan the whole table. If placing a hand on the right of the plate I find a fork that does not mean I’ve seen the fork, but it is just the first place to look, the most logical. It should be there. When things are not where they should be and I am forced to look for them I could not find them even if they were ‘right in front of the eyes’ (like the unawares point me out), but perhaps in a blind spot in my visual field, in an area that, according to an outside observer, I’m looking at but in reality I am not seeing.

These situations are often embarrassing, but there are so many, varied, some very funny, this deserves a separate discussion.
However the answer is not complete, because I answered in terms of viewable area, but within that small part of the eye that still allows me to write this article, there are other problems.
Moving from a local artificially lit to an open space, especially if it’s sunny, it needs an adjustment time and sunglasses are often necessary. The reverse situation, however, is worse, because it is slower and often completely blinding. It may sound absurd that it blinds me more the dark than the light. Even waiting a few minutes sometimes I can not see enough to find a door handle or the water tap of a public toilet.
In some cases, -I use a flashlight that I always carry with me now, especially if I am not in the company of a friend, but more often I feeland touch and behave like a blind man.
However I do not use the white cane, so I do not get recognized as blind and in the example of a public toilet, if anyone could see me from the outside would not know how to explain how I arrived to the bathroom and then not find the handle. Most people do not think that blindness may be partial.
In nightclubs, but often in restaurants where the lights are dimmed, the problems can be many (I can not read the menu, sometimes I do not see who is at the table with me, I can not get a drink alone ) but these are purely practical problems, and then somehow they can be resolved.

What remains to be investigated and that has not a generalizable answer Is about what I perceive in relation to what I see.
It mostly dependes on how the lights are arranged, the type of lighting, but also the type of music.
Sometimes I find some reference points and then I can orient myself trying to remember their relative positions, or by visually measuring the size of objects in order to calculate the distances, but in some cases I do not distinguish that some reflection. a screen, a street lamp.
Some city streets, for example, are not sufficiently dark, because I do not venture there, are not enough illuminate not find it hard to walk, scared to bumo into a post, maybe low, which inevitably stopping hit right there yes, you understand …. right there.

Obviously, every patient with retinitis sees differently and has different countermeasures that are closely related to personality, the kind of life, work, paths
Is it true that those who see ‘everything’ are actually more distracted and then they ‘feel’ less what happens in a place?
The certainty of not having visual problems limits the amount of care needed and therefore the perception of places, situations and relationships?

READ ALSO
• How We See―What Can You See? by Christiana Brucho

14 comments from the community