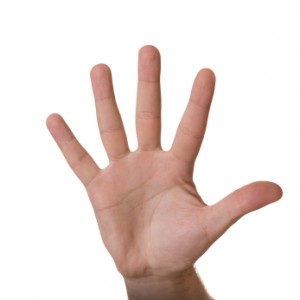 In the article How much does who has retinitis pigmentosa see ? What does he/she see? one of our reader wrote a comment that deserves greater visibility.
He has Usher Syndrome and decided to share with us five rules that help him move into the world without causing harm to himself, others and things.
I myself find them a clear explanation of mechanical movements that sometimes I do, but to read tham and to try to apply them as a method can be a viable solution for self-sufficiency of visually impaired. They are not excusecd by a white cane an even more difficult to accept than a pair of hearing aids.

Being deafblind forces to create compensation mechanisms: this means having a more developed sense of smell and touch, the same goes for the taste. I have learned 5 simple rules for living in the world without without hurting myself and anyone else.
I remember once going down in an underground station in Mestre (Venice) I collided with a child not taller than my knee. I got him on the nose with my knee cap causing cry, not to mention that the nose was bleeding, and his father, rightly, wanted to bet me up. I did not even have the strength to forgive me I was so shocked by the violence of a thing simple as a step. In the end nothing happened, and I was left alone with my bag.

1. Attention to the movement of air
An Usher use them to understand where there is a window open, if a door is not closed, but even if someone is passing by, when the subway train is coming. I think it is very important to understand how an Usher sees his environment, air movements in the long run can turn into premonitions.
2. Watch the feet
In crowded situations, an Usher never looks people in the face, for two reasons:
he cannot understand the real distance at which they are located, and therefore would not know really where I people are
and to intercept the trajectories: the people are very predictable in their movements, habitual and often absorbed and distracted, looking at their feet you know where they are, what direction they want to take and how fast they walk.
3. The information pass also by the nose: smells
As a child I could smell my mother’s also a block away. Smells are very important because they show us a presence, the recent passage of a person or the imminent arrival. A classic example is the coffee: an Usher can not hear the bubbling but smell the scent of freshly brewed coffee from very far away from the kitchen.
You learn to discriminate which odor has a sad person, a nervous, happy.
4. Feeling surfaces and vibration: touch
most likely if i was not an Usher I could not do the osteopath. As a child I slept on the upper bunk of a bunk bed, I happened by placing my palm on my mattress to feel the heartbeat of my brother sleeping under me. By the time I learned to follow the surface of the walls in total darkness in order to understand the corners and crevices, use the fingertips or fingernails to understand the sharp side of a knife, the palms of the hands to feel the sudden temperature changes.
To take the hand of an Usher is very important, because not only is useful for moving a lot but it helps to understand the mood of the person, if it is agitated, nervous, embarrassed (many times people perceive the ability of an Usher to feel beyond the senses, and often the close into themselves or clench the wrists)
5. Shoes with thin soles to ecplore the ground
I think for an Usher is essential to have fairly thin shoes, to feel comfortable with the soles of your feet when you walk on the surface, sandy, rough, or to hear when a step ends and another begins. I find it very useful for the visually impaired those tactile paths for blinds on sidewalks. You can feel them very good with the feet.

I felt the desire to reveal these tricks so the Usher can get benefit by putting them into practice and to all those who read them, understand the mechanisms behind such an apparent normality
»

There is a common denominator that links these rules. We may call attention, awareness, presence. This is actually the ability to move the focus on tools we all possess, but we tend not to use or develop for the monopoly of intrusive visual information and the leading role that is generally attributed to them.

To Interpret all the information that the world and the daily life reveal could become a game, but at the same time a discovery, regardless of whether the eyes and ears function more or less well.

Thank you Ruggero!
And you? Do you have Usher Syndrome or ‘only’ retinitis pigmentosa? How do you move into cities and places of your life?
Add them in the comments on this page or here, in our FORUM
JOIN THE FACEBOOK DISCUSSION HERE

5 comments from the community