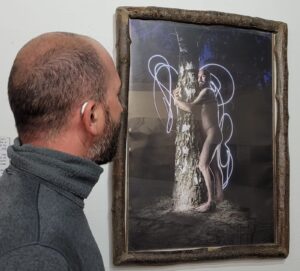 This story is one of those that must be told.
In great detail.

In 2017, before the summer, I got a phone call.
It was Stefano Scagliarini.
He was looking for a collaboration for his thesis project at the Milan Polytechnic.
That project, entitled “BLIND IMAGES. Photographers with no sight” became a story Usher Syndrome through the stories of three protagonists. Their self-portraits. Their music.
There is also a video that still continues to be seen today.
Stefano tried to show that photography is done with the heart, rather than with the eyes and with the camera.
One of those stories is mine.
But until today it had never been shown, exhibited.
Stefano wanted to keep that photo for the right moment, so as not to turn it into pixels published on the web or on social media.
Maybe it would have been interpreted, watched or maybe scrolled without the right attention for what is not just a photo.
It is a work of art.
The fact that I write about it, might seem self-referential.
I am not the work of art.
That’s the photo. Or rather, the photo with the frame.

I was in the middle of the Camino de Santiago de Gran Canaria, in the mountains of the center of the island, trying to give myself a digital detox break.
In order to see the maps and GPS tracks of the trail I had to activate the smartphone connection.
I got a message. There were photos. A video.
I watched. I didn’t understand.
How did Licia (DJ Lithium) get these photos? What is this video with the soundtrack of Nick Cave’s “Girl in Amber“?
The photos and the video were of the hoto that Stefano shot in 2017.
By pure chance Licia was at the vernissage of a collective exhibition where some of her friends were exhibiting.
While they were completing the set-ups Andrea, Licia’s husband (DJ Neue K), saw a photo and exclaimed: “But that’s Dario!”
It was really me. Still clinging to that Mauerpark tree, shrouded in darkness and backlit by a gesture of light painting.

Unbelievable.
Why didn’t Stefano let me know anything?
I went to check the WhatsApp chat with Stefano. There were unread messages from a week earlier.
It never happens that I oversee messages.
This time, fate wanted to give me a surprise.
He wanted other friends to tell me about this exhibit.
I immediately wrote to Stefano, who told me other details about the reason for that exhibition, created by the artist Angelo K, before the definitive closure of the Plus Hostel.
There was also a work by Alfredo, a Sicilian friend and artist I met in Berlin as early as 2007.

Angelo K defined this work as “beautiful”, in the deepest sense of the term. That is, something that conveys an indefinable feeling of harmony and cohesion that the ‘thing’ does not know it has.
A notable contribution to the whole of beauty comes from the frame. Handmade in chestnut wood by Simone Pella.

The photo taken by Stefano in 2017, after more than four years had returned to Berlin, framed by a tree in an exhibition that had the title DEEP.
Deep.
Like the roots.

That work was taken off the wall and  came with me.
I took back that tree, that moment.
The artists gave it to me.

It was cold outside, it was raining.
It was dark.
I was holding a wooden picture with a gesture of light inside.
I am in all of this.
I touch a tree.
That doesn’t want to be touched.
I apologize.
Like all the times I confuse trees, poles, walls with people.
I touch things in the dark.
And I don’t know they will never answer me.
To the point of falling in love with voices in the dark, or with a profound silence.
A centennial silence.
Eternal.
Like that of a tree. 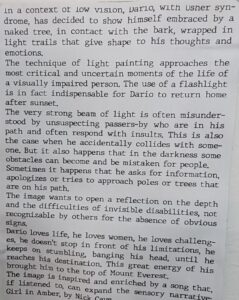 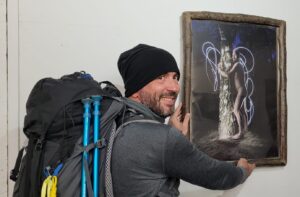 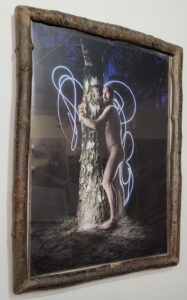 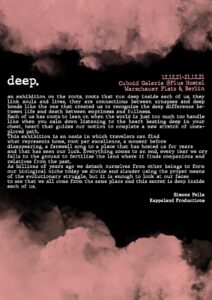 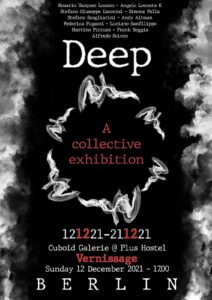 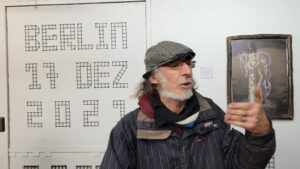 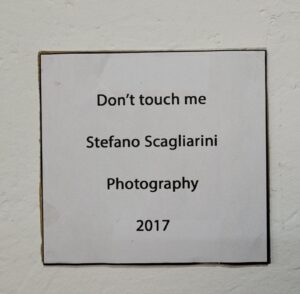