In our post Apps and devices for blind and visually impaired people we listed several option that can help blind people with mobility and navigation, but we believe that what you will read below is one of the most effective and low cost systems to make information accessible for all.

When disembarking at an airport, entering a shopping center or arriving at a railway station, we all look for visual signals to guide us to where we want to go. Thanks to NaviLens, people with visual disabilities will also be able to orient themselves in these situations in an autonomous and simple way.

Such common and apparently simple tasks as locating the toilet in a public space, knowing which bus has just arrived at the stop or going to the departure lounge at an airport or to the reception of a hotel are impossible to do without help for a person with visual disability if you do not previously know that environment. To solve this situation and get blind people to deal with these situations in the same way as the rest, the technology solutions company Neosistec put a team of professionals to work for years. The result of this work is NaviLens, a pioneering system of signage, with a universal character, which makes it easier for blind or visually impaired people to orientate themselves simply with a slight movement of the hand in which they hold their smartphone.

NaviLens is a system that allows, through some signals placed in the right places, blind people to detect them with their phone. Each one of these signs indicate, in an auditory way, in what direction one should go and what is the situation of the person with respect to the indicator poster, in addition to containing information of all kinds. The system consists of labels with color codes similar to bar codes or QR codes that are placed in the points that you wish to identify or in which you want to place relevant information for the user. These codes are read by an application that makes use of the camera of the mobile device. The information obtained from each label is read by voice. The system consists of a web application with which labels are designed and managed and a mobile app to read them. It is a low cost product that has hardly maintenance. The application works on any mobile device and is fully accessible. 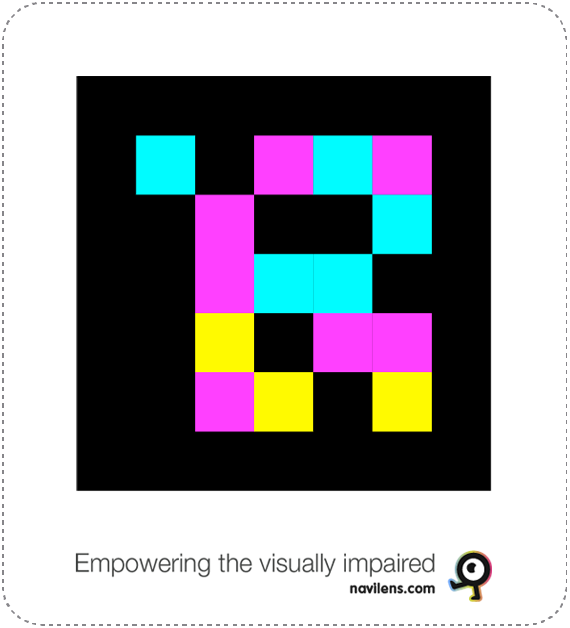 NaviLens has been developed by a team of 20 Neosistec experts who have worked on the project for the last five years with another team from the University of Alicante, and has been tested by the ONCE CIDAT research center. The program has also been awarded the Vodafone Foundation’s Connecting for Good Award.

According to Javier Pita, CEO of Neosistec, the great advantage of these codes is that they can be read at much greater distances than traditional code systems. “For example in the case of QR codes, you have to know where they are to be able to read them and you have to focus them in the center of the camera of the mobile device, which presents a lot of difficulty for a blind person, so what we did is to create a completely new code, which is not necessary to focus, which can be read at a distance 12 times greater than a QR code and with a wide angle viewfinder of the camera. All these configurations allow the visually impaired person to ‘hunt’ ‘the code in a very simple way and thus access the information it contains’.

During the last months, several Spanish cities have seen hundreds of stickers spread with bright colors printed on a black background, placed train stations, walls, shops and escalators, among many other spots.

The codes are read thanks to a free app for the user, specifically designed to improve the autonomy of the blind when moving around the city. The user lifts the phone and the camera detects the codes. Then, shaking the wrist activates the details contained in each of the labels. This way you can receive rich information about public transport, facilities and possible obstacles that constitute possible dangers for the blind.

This technology has plans for growth. For now, they are already in the metro and bus system of Barcelona and the transport network of Murcia. But soon there will be more. NaviLens is a universal revolution.

Free NaviLens Tags for personal use. How to download and use it.

NaviLens, an app that makes it easier for visual impaired people to access information through QR codes of colors, has a new functionality available for users to download tags for their own personal use. Until now these tags were available in public spaces such as train stations. In this new functionality, the codes provided are blank for users to record any information about the objects in their environment. The developers have created tags of different sizes that can be adjusted to the needs of remote reading. In addition, they are printable and easily separated.