Today Dario Sorgato, founder and chairman of NoisyVision, attended the first of the two days of the Accessibility Club Summit 2019 at the Microsoft Atrium Berlin

The program looked very interesting, and so the people providing the different sessions, but to be there was a true learning experience.

The day started with «Accessibility 101» an informal pre-session is especially targeted at people who are new to web accessibility and assistive technology. The goal was to give some basic knowledge about the most important terms and topics so attendees could feel welcome and could fully engage with the rest of the day.

Before looking at the rest of the program it is interesting to say that every attendee had to wear a lanyard wither blue or orange according to the preference of being photographed or not. The same lanyard had also green, orange and red cards which each person would expose based on the will to be approached or not by other people.
Not to mention that under the name we had you could find the HE/SHE according to how you would want to be addressed. 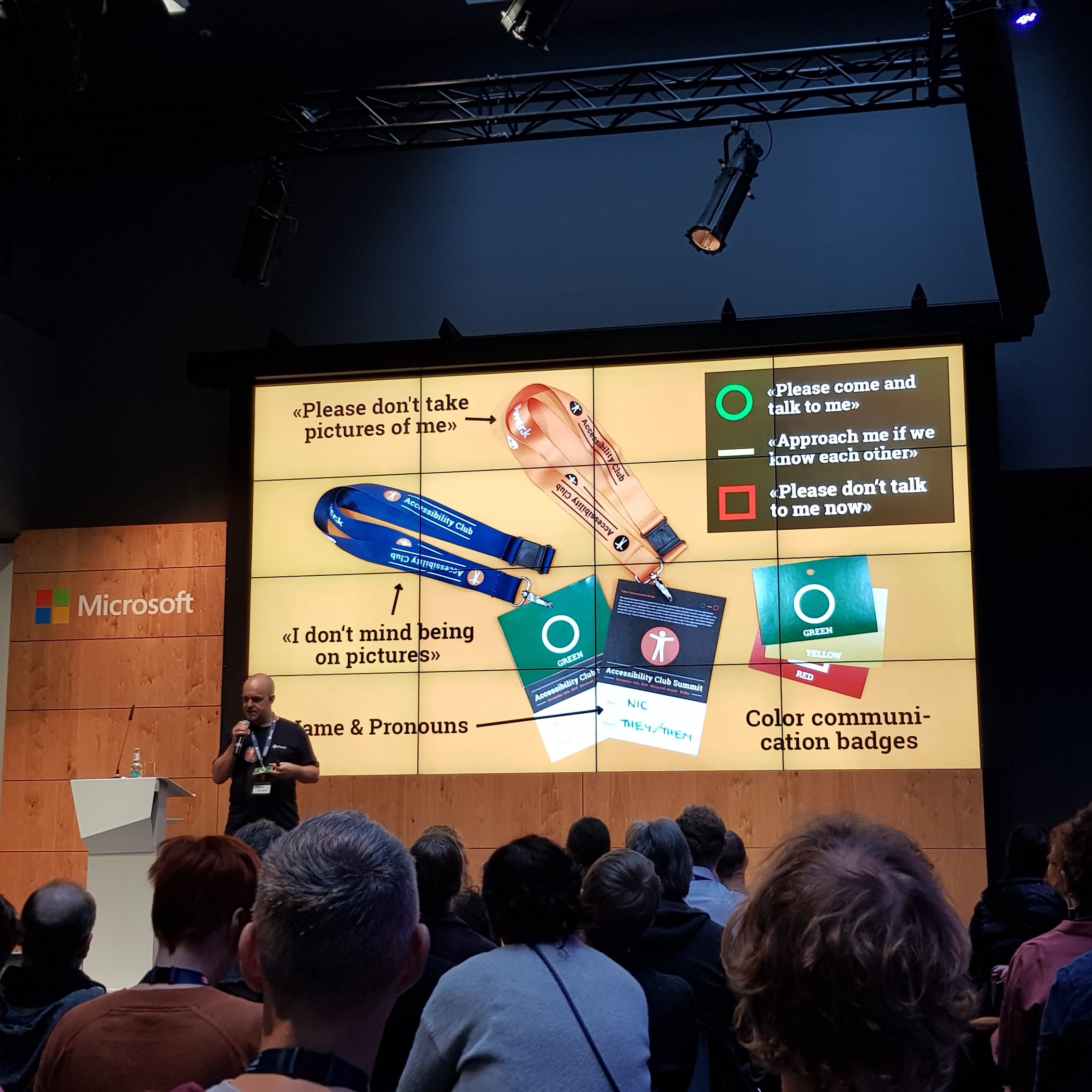 These two little details showed already a great attention to every type of human being, wish and choice. Even the emails we received before the attendance had information about the accessibility of the venue, of the underground stations nearby, about the food it would be served.

These are very simple precautions that make everyone feel included. Wow! They thought about by needs too.

Congratulations to the organizers of this!

Power of synergy: asked about how you can indicate accessibility in meetups I suggested putting a note into the meetup description.
Example:“Venue is barrier-free and food is vegan & gluten-free. If you have any other specific needs please get in touch.”#a11yclub  @a11yclub

In regards to the accessibility of the sessions I found the setup pretty good, with live captioning both on a screen or via smartphone, live streaming, good sound system.

So let’s look at the pre planned sessions.

How to Ally: Accessibility in Community Meetups Performed by Franziska Hauck
Here the slides

Drag & Drop components for blind users? Are you kidding me? Performed by Sergei Kriger

A11y — from «waaaat?» to a core part of dev team’s workflow Performed by Anna Karoń . Here her slides

During the introduction session, Joschi Kuphal, event organiser, presented also the Barcamp.sessions. Everyone could rpesent their own topics and present them during the day.

What PDF haters should know about PDF a11y with Markus

Microsoft Teams – how we do a11y UIs; tools, processes, producer feedback with Juraj

SmartScroll: Text presentation for the visually impaired with Howard

Arguments for A11y (for corporations and enterprises) with Jakob

Discussion: engaging more people in workspace and education with Maya A.

A11y design with focus on mobile devices with Mayya

The discussion and topics were mostly interesting also because they were not only tech oriented. the type of attendees was really diverse. From people with disabilities, to developers, from UX designer to graphic designers and this made the discussion

In the Closing discussion one of the main topics was the value of personal “user guides” to present one’s own needs. This refers to a user guide that people with disabilities could hand over to their colleagues, employers, to give some instructions on how to “use” them.