The exploration day would have been quite useless without a proper reflection done in the groups that the participants formed the day before. One of the objectives of The Visionary Europe workshop is to think and observe through visibility, usability and mobility. These factors are key things in accessibility of visually impaired people.

The day started with a warm up game lead by Karina. It was “laugh without laughing”. The first person in the circle formed by both the participants and the team had to just say “ha”. Then the next one did it twice, third one three times and so on. Obviously some people immediately started laughing because the game was all about laughing in the end.

The actual programme started by Dario brainstorming with the whole group about which senses are important for partially sighted people. The group discussed about what senses help to create a picture about one’s surroundings. A theoretical basis was the mutually built frame of reference that was to be used for reflecting the previous day (exploration day). Soon some qualities of accessibility started to appear and come up.

The qualities that should be used to reflect the exploration were contrast, colour, brightness, size, shape, sound, material and position of the things that were observed in different places or situations. Using this frame of reference all the four small groups started preparing presentations using the notes, photos, video clips and other data that had been collected from all around Berlin.

The groups were so ambitious and active that some people even skipped lunch and also the schedule of the day was extended a little bit. After about three intensive, complex, rewarding, effective and wonderful hours four amazing presentations about qualities of accessibility were ready to be presented.

While the groups were presenting the photos that they had selected in order to represent the good and bad things for visually impaired people in Berlin, they also created a circle of qualities with written explanations of their discoveries. All groups found excellent examples about all qualities in both good and bad parts. Some to be mentioned are physical obstacles on sidewalks, challenging contrasts in built environment and poorly lid stairs that create problems. Audio guides in the city, electronic displays in public transportation and right material used in U-Bahn station surfaces are just some of the good examples that were presented. The presentations were good enough to say it all. There was not much need for further reflection because the groups had already processed all the valid topics.

Just like all other workshop days, the Thursday’s actual programme ended with free discussion in the special reflection groups. These groups are different than the ones that were formed for the previous two days of the project. The variation of groups is good in order to hear and share different viewpoints. Dinner was served in the Alte Feuerwache cafeteria and the evening was to be continued with participant’s night. It is an evening that is formed by the workshop participants as they have to organize it by themselves. Everyone had been asked to bring some specialities from their home countries and towns. It can be food, music, action or whatever. We will see….

Over and out, Timo & Heikki. 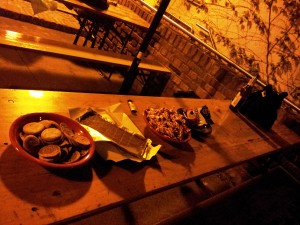 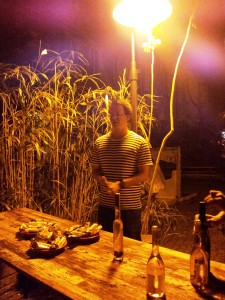