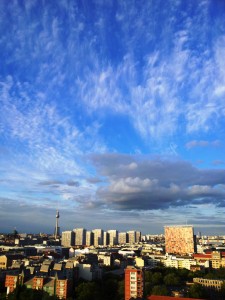 It rains here in Helsinki. The sun has been shining for 10 days for me; a lot since I left Berlin, The Visionary Europe and most of all: the awesome participants and the team. Daddy-Dario (this is the nick name we gave him) concluded it all so well by saying that we would need time for digesting the workshop. A little bit of time has gone now and I’m still smiling. The sun shines inside.

I’m one of the 16 visually impaired young adults that were lucky to have a unique chance to participate in the Visionary Europe in May 2013. You can all read the daily reports from this blog and hopefully reach some of the feelings, explorations, realizations and energy that went through us during that week. I consider myself to be a reflective person and therefore I enjoyed much the fact that we were requested to do some self-evaluation during the workshop. Since the first moment I was thrilled and excited on so many levels. And those feelings kept getting stronger throughout the week.

Our time in Berlin was of course mainly about the workshop and trying to reach its objectives. A lot of work has to be done to improve the accessibility of cities and services in whole Europe. We are VIPs! Visually Impaired Persons are Very Important People that should be listened when new streets, restaurants, shops, stations etc. are planned and built. Little things like good contrasts, big size texts, audio help and right materials create GRAND impacts.

But the workshop was not just about discussing and dreaming about the improvements. For me it was also about meeting 15 other partially sighted people, hearing their stories and sharing good practices. The energy inside the group was something indescribable. I guess a proof of that is that we had quite long nights out and still I was more than happy to wake up every morning for another busy workshop day. The team, led by Dario and Olga shall of course not be forgotten. Most of the time there was not much difference who was organizing, who was participating or whatever. We really could feel like a family even though we had just met!

When something like this comes suddenly to its end, many feelings take control in our minds. Then we need time for digestion. The end of the Visionary Europe was just a beginning for something else. Fight for better VIP-accessibility keeps going on and I am more than sure I will meet many of these people sooner or later. We are busy while studying, working and living our daily lives now, but all the numerous photos and other evidence hopefully help us to re-live this great week whenever we want to.

After 10 days of digesting it, I can say that The Visionary Europe Workshop was a life changing workshop. And by the way, I have kept my promise for some people and maintained the confidence that I was able to reach Berlin. I hope all the other participants have similar feelings. Maybe I even buy that iPhone, as it was said that it is one of the most useful aids for Visually Impaired People.