In 2007 I fell in love with a girl. She was telling me stories about a black ship. Stories about sailing across the oceans, around the world. I don´t know if I fell in love only with the girl or also with the vessel, but after few months I decided to go to the port, where both of them were docked.
At the time the ship was looking more like a wreck, extracted from the seabed.
I could hardly recognizer her, she was not anymore the one I met some months earlier. 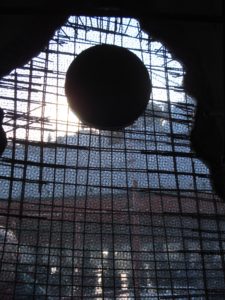 But I was there, on the edge of South Africa, between Indian and Atlantic Oceans, between land and sea, between my past and a completely unknown future.
No job, no home to go back.
So I stayed, I worked hard, hammering the cement hull of a once floating stone.

Shortly before Christmas the ship was ready to go. Black, red and white. Shiny again. Floating.
Despite the initial plan to coast South Africa and Namibia we head straight to Brazil. No way back.
This was my first time on a sailing boat, the crew was made of people from all over the world, some of them became friends. 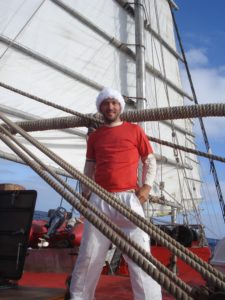 The ocean crossing took two entire months. Water and sky, Water and sky. Horizon all around, for days, and more days. Sunrise behind the stern, sunset in front of the bow.
Nothing changes and nothing is the same. You are constantly moving toward the destination and on top of the waves. Four hours watch every eight hours. For days, and more days. Sunrises and sunsets. Wind and sun. Waves and salt on the skin.
“Change is the only constant” (Heraclitus) is a mantra of your daily routine, which like a clockwork orange is the human engine of an old school vessel.
Dinners in the middle of the dark nowhere, the stars the other saw for me. Lines hammering the deck, light of an oil lamp. My headlamp lighting the meal on my metal plate. 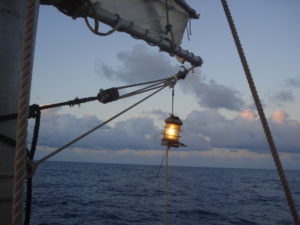 This is not the story of those two years I spent around the world, this is just the frame of my change. Something was happening but I did not know. The emptiness of the universe around me was giving space to my soul and spirit. Every sailor says that the ocean is infinite, the sky is huge and that you feel small over the water, so deep under the surface you see.
The unknown depth of the blue, the unknown distance of the sky.
Is this the mirror of your unconscious?
How is this affecting you?
You don´t know. Neither when you are there nor when you touch land again. 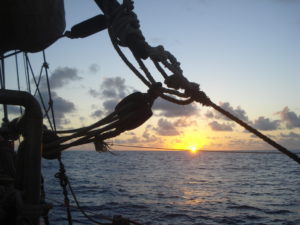 I think I learned it today. I realized that it was that long journey that made me accept the Usher Syndrome. Day after day I had to learn to listen and say when I do not hear. I learned to see with the eyes of my sailors companions, I learned to accept my limits and see them as a difference which makes me who I am, not worst, not better. Just me.

Now the ship is in Roses, Spain. Long way from Cape Town.
It has a completely new metal frame, ready to hold the cement of its curves.
What is left of the ship I sailed?
The soul.
And this should be able to sail again.
The soul is not made of cement, of steel, or paint. It is made of those who built it, those who sailed it, those who painted her eyes, wrote her name, those who saw it over the horizon, anchored in some bays somewhere, next to the Thai fishing boat.
For this reason this ship has to sail again.
And she needs your help.
The crew created a fundraiser for a rather high amount. You could buy a new boat with the same money, especially if you add up the amount they probably already spent to get this far.
But of all the stories I heard around the world, there is not such a ship on any water.
There is not such a mean of transport that allows travelers to really touch the planet, the cultures, beauty.

They could set the target on a million dollar. It would be such a shiny yacht .Who would want to be on board? Surely not those who are searching for the truth of love, of life, of nature.

It was hard time back in 2008. I cried alone, in my breezy bunk after my dog watch.
The smell of freshly baked bread was coming to my nostrils while trying to sleep.
But it was also that sorrow, that constant flat landscape that allowed my own change.
I feel in love again. She was so beautiful. I learned to like everything I was.
It was on those days that I dropped the seeds of NoisyVision. They grew to this website, they became the #YellowTheWorld campaign, they became my true acceptance of the disability that made me understand it is not our body, not our eyes, ears, that makes us men, it is, again, our soul.
I took those same seeds on the Himalayas.
I was in love again.

Her body is black, and red. Her sails are white. Her eyes are colorful. .
She was a wreck, and it sailed again.
She is now made of only steel, but she is water thirsty, hungry for waves.

It could be you the next crew member. It could be any other person that like me will find his own way toward adversity. Or just a place in the world. The slow time of her movements, the long distances of the oceans are the dimension needed for the change.
And it will happen. It always did.

Heraclitus needs our help to get a new body that allows her to travel again.
She needs new eyes over the horizon.
She needs to float, and sail, and fall in love again.