Brût & Madone (translates: Daughter in Law & Mother in Law) is the only metal band to use Friulian language for their lyrics and the band featuring members of Italian metallers Slowmotion Apocalypse and Rumors of Gehenna among others. 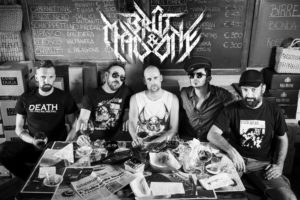 Friulian or “Furlan” is a minority language spoken in the Friuli Venezia Giulia region in Italy.
Nicolas Milanese is a Friulian photographer, graphic designer, extreme metal booking agent and one of the funniest people I know.
In 2009, while he was the guitarist of the death-metal band Slowmotion Apocalypse, he was diagnosed with leukemia and, after months of treatment, he survived but he ended up with a speaking and movement impairment that is caused by unknown reasons and continues nowadays.
He could not play guitar anymore and easy daily tasks like walking down a stair became dangerous and scary.
Slowmotion Apocalypse was put on a hiatus. An ongoin hiatus.
I, the singer of Slowmotion Apocalypse and the guitarist of Brût & Madone, I moved to Berlin a few years later.
It sounds like a hard time and it has been ever since, especially for Nicolas.
Nicolas and I are friends beyond music but what we achieved with Slowmotion Apocalypse felt larger than life, at least from my point of view.
I missed that opportunity to create, big time.
In Berlin I met Dario Sorgato and some time later I got to know NoisyVision. A few years more and Nicolas, I and a very interesting group of #YellowTheWorld people walked over 120 km from Bologna to Florence through the Appennini mountains, on the first edition of the trekking on the Way of Gods, The Gods Like It Yellow.
A big jump from those dangerous and scary stairs and no certainty we would make it… until, all together, we actually did. It felt larger than life.
This is what NoisyVision gave Nicolas and I: the opportunity to experience and it made us think of our way to #yellowtheworld. How? Through metal. 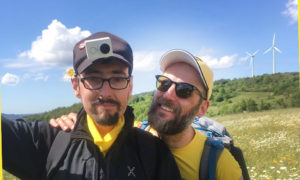