He had his glasses on a cute, curious face. He looked at me with a thousand questions blowing in his chest, without knowing which to ask first.
Then he asked the one perhaps seemed the most important, perhaps that he could somehow include all of them.

How was the mountain?
Big. I said.
Big.

And I did not know about which mountain he was asking about.
Did he wonder about Etna from where I was just back?
Or of Everest, of which he had seen the documentary shortly before?
It did not matter to specify it.
The mountain was big anyway.
That was really it. Because big means a lot, and for a child it means everything.
Unattainable, immense, distant, tough, high. I got all choked up, in seeing that innocent curiosity that maybe I could not satisfy, but perhaps that meaningful adjective enlivens the dream.
So it has to be.
So it was for me as well.
Before going to Etna I had seen that mountain only from the bottom, I do not even remember if I ever saw it smoking.
Then, on July 21, under the blazing sun, I began to walk on its slopes, towards its summit.
The newspapers wrote the story and the reasons for this departure. They  wrote it because in the end it is a beautiful story.
One of those we need to read to dream a little like that child.
I have the honor of the protagonist’s point of view.
I am lucky.
I have to tell you the details.
We, Anna and Dario, are ready since a long time.
With us there  Massimiliano, founder and president of vEyes.
The first steps along the avenue of vEyes Land, home of the homonymous NGO who proposed this walk in support of #YellowTheWorld.
The battle scream that takes the adrenaline from the heart to the fingers, hands and feet.
One, two, three … Yellow The World!
There are some friends walking the first steps with us, coming from a very long way, to be there, for that scream, for that color, for this departure.
That cone in front of me, that white and vertical column of smoke.
I shiver.
The first slow steps, to take the rhythm, to discover the hot nature in which we are going, to listen to the descriptions of Chiara, Marta and Antonino, the guides of Madala Organic Tours.

The first stage of the day is beneath the fringes of Ilice di Carrinu,
I got up on your branches, with the fear of breaking them even if they were huge.
We hugged you because you’ve been hugging us for 700 years.
Dario, Anna, Chiara, Max embrace the secular holly oak.

The diversity of vegetation that the Etna Park offers is surprising.
How many Sicilians know about it?
There are also the more mulberry, so sweet, and fresh. Picking fruits from a tree is a gesture I never do, I never remember the previous time I did.
Perhaps it is one of the gestures that a visually impaired person is forced to abandon.
Anna is with me.
I had walked with a blind before but every time it is a discovery. Everyone has his way of seeing. It sounds like a paradox, but that how it is. Just because we do not see it with the eyes.
Anna was accompanied by her faithful Nora. Perhaps the black of her fur did not help the suffering of the heat.
There are Chiara’s eyes, Marta’s hands, they are helping us along the way, and Nora, free from her role, can finally walk her pace and play with the pine cones.
These are the details of a journey, small lava stones under my weary ankles, sweat on the shirt glued to the back, burning skin, the powder on the lips, the hot feet in the heavy shoes that anchor me to the ground.
Water that is never enough.
I could remember each step, almost every thought associated with it, perhaps speeches or chants.
They are still alive.
They will go.
I will remember the last 500 meters on the asphalt, that countdown between the pain and the beer.
The last steps dragged with fatigue up to the Citelli refuge, at 1741 meters.
Above the sea level. Yes, the sea.
Have you ever seen the sea from a mountain?
Have you ever seen a coastline of Sicily lit by electricity?
I was also told about the falling stars.
I would be more curious to know where they are going.
I would like to know if it is perrmitted asking someone to wish for me.
Have you seen sunset? And the yellow broom in the morning, the lava honed by the winter water, the ash on the paths, the black pine?
Have you seen the astragalus siculus? That flower cushion that makes you blaspheme?
I do not know if I really saw all of this.
Surely I perceived what these names meant for me.
The sea from the volcano. I just need to put these two words together to tell myself a story.
Yet it is mine, I have lived for me.
In the name of that color Anna and I were supposed to bring to the top.
For a few hundred meters the color was brought higher us to so many, almost eighty, who have joined us for the stretch of the Bottoniera.
One could see this black tongue, dotted with yellow tufts and burnt trees.
Dead wood on a living earth.
This is a paradox too.
Earth, earth, earth. Earth.
Stones and stones. Black.
There are still a few steps to get to the top.
It’s hot.
There is a strong wind.
There is sulfur smell.
The wind mixes it all and brings to my nostrils dust and gas.
I can not breathe, I can not look, I open my eyes and it’s all yellow.
I can not believe it.
Weren’t we meant to paint the Etna yellow?
Beaten on time by millennia. Thousands of years of smoke Millennium of ash, fire and lapillus.
I took some with me and left an Icelandic one.
An exchange of stones, yellow and black, because 2017 is really an explosive year, a year of earth andf fire.
I do not know if I was crying with joy while I was up there.
The wind did not let me time hear drops flowing.
Neither tears nor sweat.
Only yellow powder on my skin.
I could hardly keep myself standing on the black stones.
Nino helped me with that kind discretion. While Biagio helped Anna.
There was no worse place to stay, there was no better place to be.
I was on another roof of the world, I was on that place between the sky and the sea.
I wish I could take you there.
You, who may are reading this line because you also have a limit to overcome.

# VEyes4YellowTheWorld was meant to paint the Etna volcano with yellow, but also to demonstrate to those who discover that they have a vision disabling disease that life continues, that one can and should continue to dream and fight to pursue and achieve any dream. Being a visual impaired has some difficulties for sure, but Dario and Anna have demonstrated and continue to do so, that often the real barriers are in our mind … And this also applies to all those who believe they are “normotyped”. (Massimiliano Salfi)

We are not superheroes, we are not different from each one of you.
Maybe we’re not scared.
Maybe because we have an enemy to defeat, or maybe just because we want to continue to win.
Whether it’s medals or conquests, every victory is one step higher than that mountain from which I would never go down.
How is that mountain?
Even bigger.
So big that explodes inside of me. 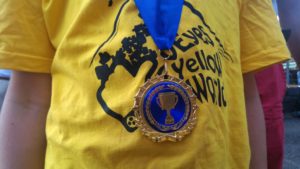