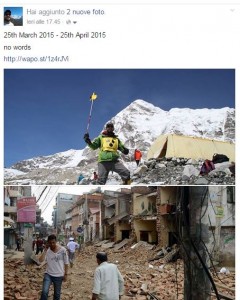 Yesterday I managed to publish only this.
No words.

Today I want to find them. I want to search through the rubble and dust the words to describe this shock.
A shock wave like a tsunami has traveled half the Earth and devastated me.
My clock is still synchronized on the time of Kathmandu, on those strange 5:45 hours difference.
It was my way to feel still a bit there.
On the table an exhibition of souvenirs. Tibetan bowls and bells that have not woken the right gods.
Colorful prayer flags hanging from the lamps and a red and white cloth on the door.
A book about the adventures of the climbers.
Crusts of earth on the soles of the shoes.
Nepal is in the air in my house. Mountain air.
I was still in the silence after the trip, the time in which I enjoy thinking these objects come from far away and have brought them here myself.
I was trying to digest my adventure, to figure out how to put it in order to tell it and make it become the wave of yellow that was to invade the world. #yellowtheworld

And now?
What sense have my steps, my efforts, my emotions?
Where do I put this whole story?
I have images in the eyes and over 3000 digital photos. I have videos of the temples and the chaos of Kathmandu.
It will never be the same city.
I have so many stories I had already put into chapters. Each with a name.
I just had to wait a few days.
Instead I have to start over.
Start again and this time do not know where.
There are the dead bodies. Many. Too many.
There are thousands of people homeless, with nothing.
I can not even get direct news of my friends. Maybe Dil, my guide, was walking up there with some other trekkers. Who knows if and when they will get back a bit of electricity to charge the phones.
Who knows when the phone lines will be working again. Where everything is so slow.
It was already difficult before. It was hard to rebuild Nepal after the fall of kings. And now? What will be of this small state that has the fortune and misfortune of being nestled under the roof of the world?
No wonder if there was an earthquake. It is not the first one. Will not be the last. But perhaps no one remembers the previous, too far away to be in the life of one man.
Only eighty years that in the time in the world are just a sneeze after another.

But they are not a random time for me.
I framed a trip to Nepal between a plane crash and a devastating earthquake.
Somehow I was lucky.

I am an almost-dead.
Not so much because I risked, but because it is as if the earthquake had destroyed my memories that I had yet to begin to remember.

It is a selfish thought.
Who cares of my memories when the earthquake destroyed a country and the lives of many people.
It is not so simple.
My memories are not just what I wanted to remember. I had the desire to go back, to contribute to the daily life of those few Nepalese I met in person, the desire to do something for the future, to fulfill a wish launched with a rusted no value coin in the fountain under the statue of a giant Shiva.

I have to go back to silence.
Or maybe I have to move my next steps over broken bricks, pieces of sunken road.
This time is different.
I  can not compare the power of a Japanese tsunami or an Indonesian earthquake, the magnitude is not only a geological matter.
The violence of this shock shakes me to the core. It is not true that all lives have equal value. We feel sorry for the deaths but in a short time they will be just numbers.
Nepal has to start again and perhaps Thailand shows that it is possible.
And the reconstruction will be mine too.
Who asks me how I feel maybe I’ll still give suited answers, as I have done so far to disguise my desire not to say anything false.
I’ll have to lie again.
Because I cannot tell everyone that I contemplated death and analyzed in detail all the items of insurance policies. I was afraid of that small plane flying out to Lukla, I was afraid that there were high ravines and crevasses. I also contemplated the idea of an hearth attack and that I would vomit my soul reaching for air. But at the item “Natural Disasters” I scrolled down.
I escaped one of the largest of Nepal.
The world has gone crazy. It is a fact.
Now I want to try not to go crazy with the world.
Kathmandu and Nepal were already before places of dust.
Many people are wearing masks and scarves to protect the airways.
Now I just hope that the winds will be blowing to make it disappear and to filter some sunshine.
I do not know what color hope has.
I’ll take a random one.Perhaps still yellow, which in prayer flags symbolizes … the earth.
When I knew I felt a new shock. Shivers this time.
As if it was all my fault.