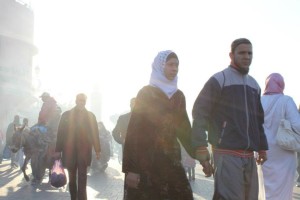 Other photos of the trip

I recently returned from a wonderful trip to Morocco.

It was since a while that I was not traveling alone, but in recent years I have traveled a lot, especially between 2008 and 2010, when for almost two years I traveled the world aboard a vessel of ferrocement .
While cruising on board dell’Heraclitus was not difficult to travel because I had to learn to move in and out of a restricted environment, although always in motion. However, in a boat, attention must always be high even for those who see well.
In that case it was almost more difficult from the standpoint of hearing because it is vital to understand the commands of the Captain and hear any warning signals. After I found the way to interact with fellow crew members that were aware of my limitations, I have learned to move and act independently and fairly easily.

During the boat voyage I took some weeks off, in different periods and countries to explore by myself Malawi, Mozambique, South Africa, Argentina, Brazil, Paraguay, Jamaica, Cuba- (Map of the voyage)

Before this trips I had been in Australia, New Zealand and Malaysia.
I also walked the Camino de Santiago, from Saint-Jean-Pied-de-Port to Finisterre

From Agadir to Marrakech, 242 Km
From Marrakech to Boumaln Dades, 315 Km
From oumaln Dades to Merzouga, 251 Km
From Merzouga to Nkob, 227 Km
From Nkob to essaouira, 580 Km
From Essaouira to Imesouane toAgadir. 189 Km
From un totale di 1800 km (vedi la mappa dell’itinerario)

What does it mean to be a visually and hearing impaired traveler?

Given that I am an independent traveler and organize routes, stops, transport and accommodation always by myself, one of the main problems that occur before departure is about the baggage.

I travel with one or two backpacks. A large one for clothes, books, towels, sleeping bag, etc.. and a small one to put things a little more important and valuable, such as documents, camera, diary, money.
During my movements I focus my attention only on the small one. If someone were to steal the big one, would not be a major blow and I should not need to end the trip. The loss of the small one would be disastrous.
Though I have learned to minimize the load, I can not give up some aids that are still heavy.I always have with me a small pharmacy and a first aid kit to heal wounds more or less deep, extra batteries for both torches, small telescope, white stick, batteries for hearing aids, … Even if it is not an exorbitant weight when traveling with a backpack each gramm more makes a difference, especially if you are planning to walk, even if just to search the hotel when you arrive in town, …

I arrived inAgadir in the late afternoon.
Too early to not wander around, too late not to consider the possibility of getting lost in the city and fail to return before dark.
I decided it was worth to try. At worst, I would have taken a taxi.
While I was heading to the beach, I tried to memorize some corners, buildings, billboards, so that I had in mind a kind of map.
Planning I might have to retrace the road back with a different light conditions I tried to focus on street furniture that I could find in the dark.
When moving for the first time in a place that you do not know, orientation is also on the views that our memory recalls.

Oh, I remember this avenue with the mosque in the background!

But a visually impaired person, going to the same street in the dark can not see the mosque in the background and does not know that the road is the same that has already traveled.
It is necessary to memorize objects at a short distance and try to figure out if they would be also illuminated at night, testing the proximity of the rstreet lamps.
It sounds like that what for a sighted person is a stroll to the beach for a visually impaired is a Little Thumbling way
After eating a tajine of fish on the beach, admiring the sunset, I hurried toward the hotel and was going well until the last corner, when I have taken the wrong road.
Agadir by night is very dark and dangerous, but not because of crime but because there are holes, steps,stones, scooters, bicycles and people.
I asked for directions and they all answered me in French. I do not know French.
The kind Moroccans that showed the road were gesticulating with their hands to mimic the way, but I could only watch their lips to try to guess the words or watch hands to understand the direction. In other words I had to ask for directions every 50 meters and at every intersection.
But I safely made it to the hotel.

In Marrakech, it was much better.
I met a nice big man that somehow framed me and enrol himself as my guide to the city.
They do it with all the tourists. They try to win the day and often they succeed.
I like very much to get lost in the streets of a city and Marrakech has a medina that lends itself to just get lost. There’s no way not to get lost. It is a real labyrinth, but that is the point of a medina: discovering it according to your intuition and let your feet decide the direction.
However in Marrakech bicycles and mopeds are whizzing at a unbelieavable speed. If you are not always careful about who comes from the front and from behind, it could be dangerous.
In a place like this to have a guide and in any case a person who takes care of me was crucial.
Hassan took me by the hand throughout the afternoon and took me everywhere pointing to all steps and all obstacles. In addition to taking me to the city, he spoke about him, his family and his people, he amused and took care of me.
Give him a tip seemed the least I could do.

Even in Boumaln Dades I was lucky.
To go hiking in the Dades gorges you must have a local guide.
There are no trails or signs, you just have to know the area.
Lhussein, a 39 years old man with 17 years experience as a guide, could not be the best guide for me.
I pointed to all the streams that I had to jump, the stones to avoid, when I had to bend down the branches. I followed his steps as if I was his shadow and when I wanted to spend some ‘time to admire the scenery, I stopped to enjoy the moment with the necessary calm.
The most surprising thing was that all those who have somehow led me, in town or in the mountains, seemed to know exactly what I could and what Ic old not see. He seemed to have known about retinitis pigmentosa and its consequences.

After 3 days of hiking I took a bus to towards Merzouga, at the edge of the Sahara Desert.
On the bus I met Hassan and he has offered to help me juggle in the agitation of the city of Erfoud and Rissani.
I arrived with him at Auberge du Sud: a wonderful hotel where I could never get by myself. It is a Kasbah near the desert and to go and admire the colors of the sand at sunset I just had to ride on a camel on the mountains of sand.
The great thing about spending a night in the desert is also admiring the stars in the skies of the desert they say are millions and bright.
Unfortunately I have not seen them. In fact I saw one, that probably was not even a star but Venus.
But the night in the desert is also the opportunity to see the sunrise and the graduation of pink and orange of the sand when the sun peeks behind the dunes.

I had to ask for help in many other occasions.
To go to the bathroom at the bus station, to find the hotel in Essaouira, to go to the bus stops at 5 am in Nkob, to climb the stairs of the Kasbah.
Sometimes it is difficult, but in most cases no one has shown concern or questions, they just helped.
No one took advantage of me or tried to rob me and I never felt in danger, if not once in Jemaa el-Fna, the square of Marrakech, where I went wrong street, I was tired, stressed and a bit sad when I had a head-on collision with a horse.
Everybody got scared. Me too.
Fortunately the horse did not frightened the horse, it stopped, neighed a little and left.

It is clear that a travel story can not be reduced to a few paragraphs, but I just wanted to collect a few episodes and concrete example to show how often the idea is more scary of reality.
I myself was very tense before departure, but once there it all becomes almost predictable. As if the solutions came before the problems.
It is true that I never pushed the limits and that I had to give up some evenings out with no one who could accompany me, but I also learned to enjoy what I have.
Even in silence in my hotel room, listening to the voices coming from the street, the prayer of the muezzin breaking into the night, the smell of goat meat, the birds singing in the early morning on the roof of a riad in the medina.
A trip is made up of small details and to catch them is not necessary to do what others do or that someone told you to do. Everyone is traveling in his own way.
I travel like thism, even alone and doing nothing, traveling just because I’m lying in a bed in the heart of Marrakech, and nobody knows I am there, I think and dream and write.
I write a story that one day I will be able to tell