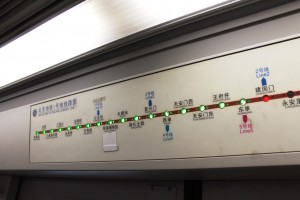 Wathc the other pictures

Some time ago I wrote an article where I highlighted some tips and situations on the theme of travel from the point of view of an Usher.
I recently returned from another wonderful and intense journey in China. I was visiting a friend who lives and works in Beijing since about a year.
This time I started with a different approach than all previous trips , for several reasons.
The first is that I knew that China and in particular the Chinese cities are the cities with a capital C. Beijing has more than 18 million inhabitants , Shanghai more than 23 million.
Any idea what these figures mean? Disproportionate size, huge buildings, ten-lane streets, intricate metropolitan networks, cars, bicycles, motorcycles, smog , noise, dogs, cats and so many people and people anytime, anywhere.
In a word: confusion, a continuous fast swarm of people and vehicles . A continuous motion.
If all this is transposed in China, where manners and customs are different from those in the West, all translates into an uncontrollable frenzy.

Now, if this is a shock to any European, accustomed to social rules like leave off passengers before entering a metropolitan train, keep right when walking on sidewalks, cross the road at the pedestrian crossing , talking on the phone trying not to annoy those around us, horn only if necessary to alert a pedestrian, try to imagine what it means for a visually and hearing impaired .
As you are good at imagining, I assure you that is not enough.
The Chinese seem to have never seen a white cane and although there are guide lines on the sidewalk, they probably have not ever wondered what the use .
In Beijing everyone looked bemused and rarely facilitated the passage.
However I was lucky enough to move most of the time with a friend, and walked beside him holding onto the arm or placing a hand on his shoulder.
Marco had to be ever vigilant and interpret the trajectories of the myriad of vehicles and pedestrians not to clash himself, not to clash me.
The obstacles on the sidewalks are numerous and, as I noted in Turkey , the worst are always those low traffic poles.
They are yellows and black, appropriate color scheme, but still I can not explain why they should be 40 cm high, perfect height to clash a tibia. Obviously I wanted to test the strength of mine, but the results have been bad and I’ve got an excruciating pain and a wound, not very deep, but enough to become infected and torment me for ten days. It happened on the first day and since I always put in account an accident, when it happens I think, ” Okay, this time I already paid my bill ” so I’m sure that nothing will happen to me or at least no worse .

But then we partially sighted people are destined to break our shins and only travel in the company of a friend?

I do not think so. This is my experience , this is me .
The trip with a friend with no visual impairment allows a much lower degree of stress and to be able to go in the evening somewhere, but the golden rule for every traveler should be

Everything you see, live and do is already a gift, you do not need to see and do everything they write on the tourist guides .

While the trip to China was different from the previous ones because I was almost always with a friend, it is also the first trip after the workshop The Visionary Europe.
Following the workshop that was held in May in Berlin, I now travel with a critical eye and attentive to everything that concerns the accessibility of the city.
I like to pay attention to how they approach the issue in other cities and in this case in a different continent.
I believe that following the 2008 Olympics, moving in Chinese cities is much simpler. In fact, all the names of the subway stations, streets and signs in general are in both Chinese and in the Latin alphabet, as well as audio announcements are also in English .
The most exciting thing that I have noticed are the maps of the underground lines with LED lights that indicate the next stop and the direction of the train.

The underground network in Beijing is one of the simplest I’ve ever seen : concentric rectangles and transverse lines . Move in the city is like playing Nine Men’s Morris.
In Shanghai, I noticed that the signs displaying the names of the streets in the French Concession also have the letters E and W , N and S , indicating the cardinal points; very useful for guidance, especially in case of grey sky from cloud or smog.

And now we come to smog. It issomething never seen and never breathed. In Beijing, many are moving around with masks. But what has this to do with the accessibility and low vision ? Well, definitely light does not dazzle, but, on the other hand most of the vehicles two and three routes and some of those four are electric, so you do not hear any noise when they approach, with the consequent increase in the possibility of accidents.

Communicating with the Chinese is difficult even with gestures. I think they have a different way of thinking and so what seems obvious to us, for them may not make any sense. However, this is not a problem for the visually impaired or hearing impaired, but a cultural difference that applies to all Westerners.
The best way to ask for directions is to show the Chinese name on a map or GPS .
I came to the point of taking pictures at the maps before leaving home and then show the pictures with the names to the taxi drivers .
Smartphones are truly revolutionary in that sense. And the Chinese use them all the time.
They all have smartphone in hand. Fingers that touch screens, while walking and while driving. Always. I do not know exactly what they have always to see and read, especially given that they do not have Facebook. (It seems they Chinese version of the social network , Renren)

Interesting audioguides. Chinese cheap stuff, it is obvious, but having a tablet with a map of the Forbidden City that tells which position you are and that activates the voice description based on the GPS position, it is quite innovative.

The last few days were spent in the area of Guilin, in the countryside in the south of China. Fabulous terraced mountains for rice cultivation, like thousands layers of Heaven and boulders along the banks of the Li River. In this case, be with Marco has made a difference, since they all run by bike. After a failed attempt to hire a tandem we opted for a comfortable motor scooter .
But no one beats me on trek . I’m a great walker and only the Sherpa ladies of village of Dazhai are able to walk more than me. And they also carried my backpack!