On the morning of Thursday 2nd May 2019 the Primary School Elena Lucrezia Cornaro Piscopia in Volparo (province of Padua, Italy) was dyed yellow.
It was not the first time that this radiant color invaded a primary school. Just a year ago, at the school Maria Boschetti Alberti in Piove di Sacco (Padua, Italy), yellow had a leading role.

The theme is the same, the school is the brand new and colorful building. The colors are not lacking, but today one dominates over all.
Children gathered in the great hall, sit politely and wait for something to happen. Perhaps they know that today Dario Sorgato will come to see them, someone they imagine as a great explorer that he sees badly, that sees through a tube.
Certainly they did not imagine that he would enter the door in front of them all dressed as a “Yellow Willy Wonka”. The surprise silences them. This strange yellow magician moves a stick that looks like a magic wand, but as the magician will say, it is a stick for the blind, to identify obstacles before bumping into them with legs. Even the children were also all dressed in yellow.
150 yellow T-shirts, the open mouths, attentive eyes. To try to learn these new words that the magician says loudly: low vision, diversity, prejudice, inclusion, disease.
What do all these things have to do with yellow, such a beautiful and shiny color? With simple examples, speaking loudly inside a white megaphone, the magician Dario explains these new words. And we see that they understand. They give pertinent examples, they tell the stories they know.
But Dario, who does not see or hear well, is not what they saw on the internet, on the videos that the teachers had shown. They want to know the traveler, the one who climbed the highest mountain in the world, the one who doesn’t seem to be afraid.
But were you afraid when you were up there? Yes, at times I was afraid, because the thin air had clouded me even more the sight.
And what are the places where you have been? There are many, try to tell me the names of some place you know. It seemed difficult to find one where I hadn’t been, but in the end a child said Japan. And I’ve never been there.
I would like to have a list of all the questions I have been asked. Some are so new and profound that I too have learned something from them.
For example, when they asked me if I was sad when they told me that I have this disease. After thinking about it, I realized that yes, I was sad, but that now I am not anymore and that is why I dress in yellow, and that I scream at the top of my lungs that I want to paint the world of yellow. Because the yellow has this power, to turn ugly things into beautiful things. The yellow has the power to make children understand that we need to decide our lives. And that maybe even if I see differently, I’m not worse than my friends. And those who were born to non-Italian parents, maybe they eat something different from us, but this is the beauty of going to their home for lunch to discover new traditions, new cultures.
Because in diversity is wealth.
And if someone is different from us, it shouldn’t be fooled.
But as if I hadn’t even said it, a child came to me, proud to show me that she too had hearing aids. It was almost a boast, because he had something like me, that the others didn’t have.

The questions were many, all ready behind their raised hands, patiently and politely waiting for their turn. but there was no time for everyone. I then answered in the classes, while they ate the snack chosen at random from that of the companions, trying to understand the taste of food, learning that things have not only visual qualities, even more so food, which in fact involves all the senses in order to be eaten. And then we learned what trust is mutual help, with a simple obstacle course that they had to perform blindfolded.

But painting in yellow cannot be just a metaphor, so they took brushes and jars and painted two benches that will remain in the school to remember this different day, full of sunshine and this warm color

We ended up singing all together a song that sounds like a list of the yellow things in the world, but there’s no better way to really warm up the strings than screaming all together: Yellow The World! 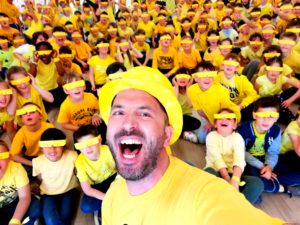 It was hard to say goodbye. They were all around me, telling me they love me and want me to come back. And if I can, I keep the promises. I said I would show the world their drawings. Here they are.. 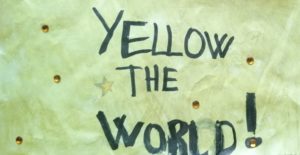 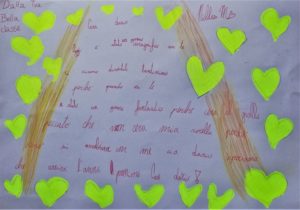 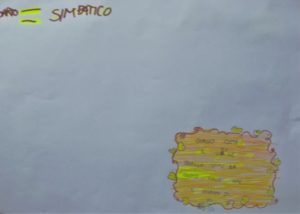 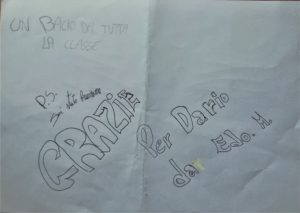 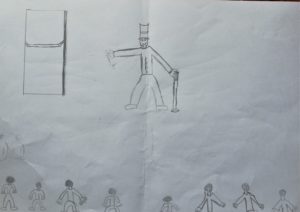 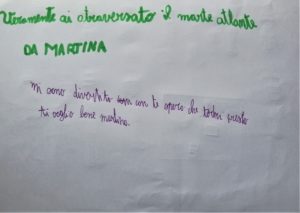 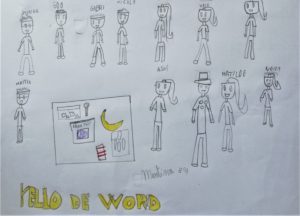 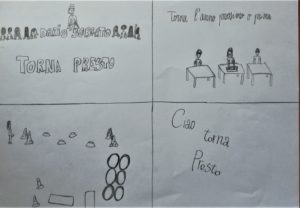 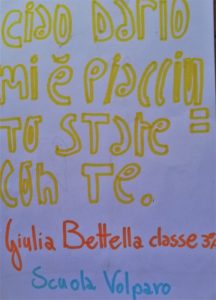 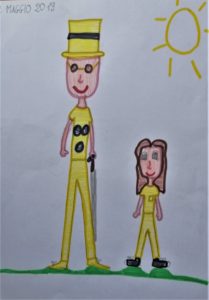 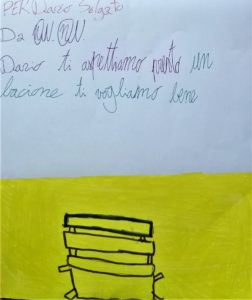 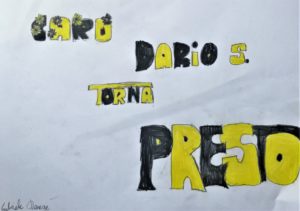 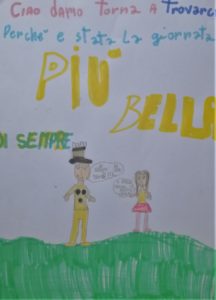 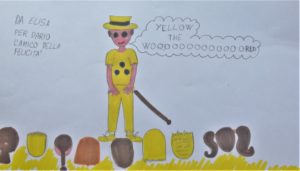 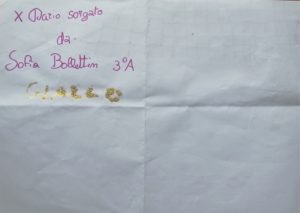 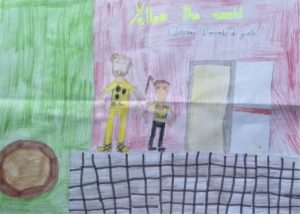 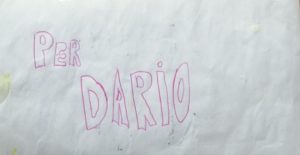 And I promised the children of the school in Piove di Sacco that I would return. So I did. 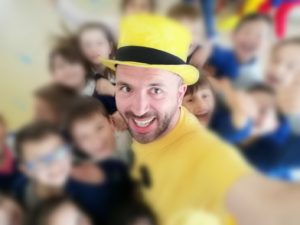 They welcomed me with immense warmth, remembering the morning of last year and, with some help, also the words we had learned a year ago. That low vision is also tunnel vision was not suggested by anyone to that child. He might be taller, bigger, but it will certainly continue to grow remembering that there is a color that more than other makes the world a better place.

We are available to carry out projects like this or similar in primary, secondary and high schools. As written in a comment on our Facebook page:

children are the future, if we want a better world we must start with them.