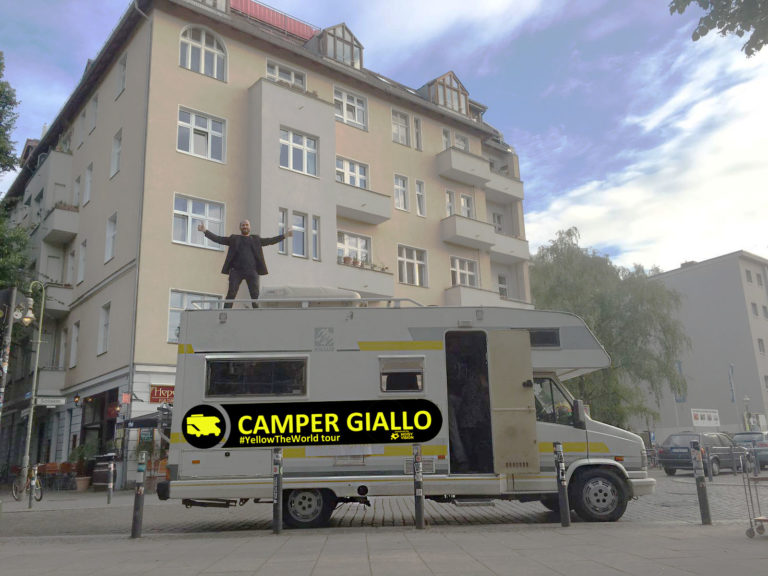 In 2016 NoisyVision contributed to the crowdfunding  Gino, Hate-Free Caravan community.
We promised that next NoisyVision adventure and its yellow world, would have been with the camper,

Here we are, as promised to present the next adventure and its program.

Yellow Caravan. #YellowTheWorld tour
Journey by Caravan for visually Impaired people.
First and only one in the world.

With the contribution of
Retina Italia ONLUS

With the support of
vEyes (virtual Eyes) – ONLUS

OBJECTIVES
We will depart from Milan and drive toward the center of Italy with the following purposes:
– Put together travelers from around the world who want to experience a trip on the road.
– Meet new people and share a memorable experience.
– Get to know wonderful places of Italy.
– Walk in the nature.
– Promote the documentary shot along the Way of the Gods, “The gods like Yellow”, May 2016.
– Consolidate the relationship with the people and the institutions of Emilia Romagna and Tuscany, to transform #YellowTheWorld into concrete actions.

PROGRAM
(Changes may come in the following weeks)

Sunday, May 14. Departure by camper from Milan to Bologna
Screening of the documentary in Bologna. Overnight in Bologna.

Monday, May 15 – Trekking near Monzuno.
Screening of the documentary film in Monzuno. Overnight in B & B in Monzuno.

Tuesday, May 16 – Trekking from Monzuno to Madonna dei Fornelli.
Overnight in B & B in Passo della Futa

Wednesday, May 17 – Departure by campers from Passo della Futa. Arrival in Fiesole.
Trekking to the Valle del Mugnone.
Screening of documentary in the late afternoon / evening.
Overnight in B & B.

Thursday, May 18 – Departure from Fiesole.
Trekking in the Casentino. A wonder of nature and a scene between two ancient abbeys: Camaldoli and Prataglia
Overnight at Hermitage of Camaldoli

Friday, May 19 – Trekking to Marradi, Hermitage of Gamogna
Overnight at the Hermitage or in the campervan somewhere nearby.

Saturday, May 20 – Departure to Milan.
Screening of the documentary film in Milan.
Closing Party.

WHO CAN PARTICIPATE
Anyone can participate.
There are different ways to participate
1. As a member of the crew of the camper, for the entire duration of the trip.
2. As an independent participant: whoever parties can participate in one or more treks of the tour, independently.
3. As a spectator at one of the docu-film screening evenings

The campers available are two, for a total of 12 places, including drivers.
There are 8 seats available.
If the number of those wishing to join the crew were to be higher, the NoisyVision team reserves the right to make a selection according to the criteria of
– Visually impaired first.
– First-come, first-served.

FEE
The fee is only for the crew members.
It includes:
– Camper Rental, gasoline, highways, insurance.
– Breakfast and dinner.
– Overnight stays.

Thanks to the contribution of Retina Italian, the share will be only 450 Euro!

HOW TO REGISTER
Send an email to
info [at] noisyvision.org

DEADLINE TO JOIN THE CREW
2nd April 2017. Within this date the full fee should be paid.