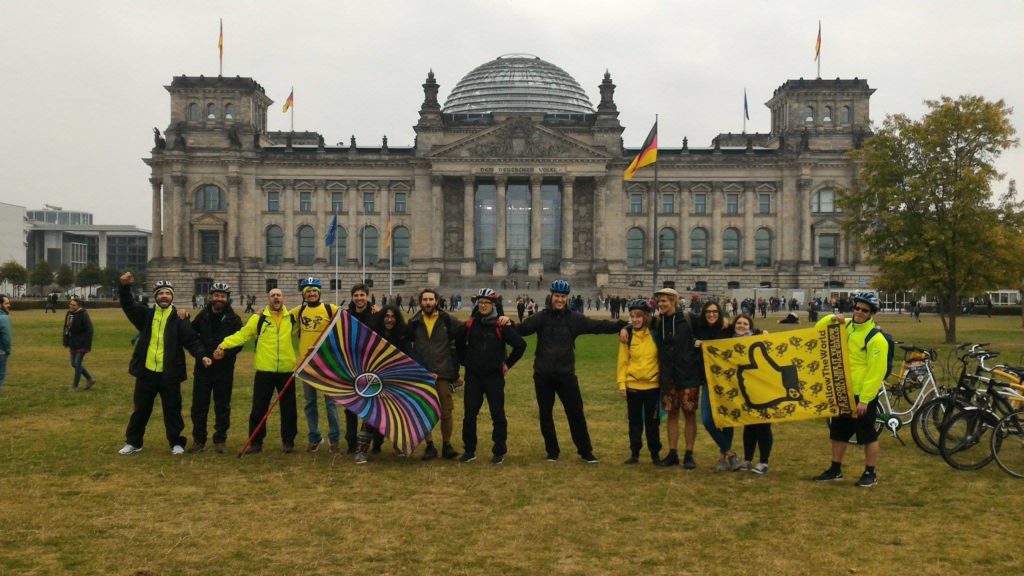 Before last Saturday, the 1st of October, I could have not remembered the last time I had ridden a bike in a big city, as my progressive vision loss has been affecting my mobility over the years. And although I really wished to do so, I hadn’t had the chance to go for a ride in tandem, which is one of the safest way for visually impaired people to cycle without hurting themselves or unfortunate passers-by. My wish was finally fulfilled a week ago, in Berlin, thanks to the NoisyVisionary People.
When I was planning my trip to Berlin, for the Premiere of the documentary #YellowTheWorld – Everest Edition, I was asked what I would like to do during my stay in town.
Almost without thinking I dropped the idea of a tandem ride.
I was so happy to hear that the NoisyVision team was able to find 7 tandem for rent and was planning a safe and still enjoyable route.

7 visually impaired people and 7 normally sighted people, all wearing yellow t-shirts, met on Saturday morning, under the rain, in front of the bike shop in Grunerstraße, in the very center of Berlin. We were sitting on six tandems and two normal bikes. The normally sighted people had the honor of driving us VIPs except for one who led the group. Just one brave visually impaired guy cycled on his own bike closing the ranks.

At first we followed Unter den Linden. Even if it’s a busy road, it’s also wide and straight and we had all the time to get familiar with the tandems.
It is not difficult but you need to find the right rhythm and balance. You need to follow the movements of the driver and blindly trust him or her.
Our first stop was at Brandeburger Tor where we took the opportunity to snap some GROUP PHOTOS (the refrain of our day!).
The rain was threatening to get us all wet, but on one hand we were equipped with jackets and hats, on the other hand we were warm and happy, so that the rain would evaporate almost instantly.
It is strange how the perception of the weather is different according to your mood.
After this stop, we mounted our double bikes, shouting “YellowTheWorld” under the eyes of surprised tourists. We cycled along the Spree, skirting some of the most important attractions of Berlin, like Bundeskanzleramtsgebäude, the Chancellor of Germany, the Haus der Kulturen der Welt, which the Berliners are calling the washing machine and the oyster.
Finally we reached the Charlottenburg Palace. What an amazing park!What an amazing park!

We had a quick lunch-break, then we turned back our bikes and, going through Tiergarten,we got to the last stop of our tandem route: the Reichstag. We came back at Grunerstraße in the late afternoon.
In spite of our sore butts we still found the energy to have a beer together.
The rain and the wind on the face, the voice of my buddy, the laughs of the other bikers, the views of Berlin, the colors of an early autumn. So many stimuli and thoughts were going trough my mind, but the best was having the chance to experience again the speed and, most of all, the freedom that trusting someone gives you.
Being visually impaired is a nuisance but if you take the time you can still find a way to enjoy life and to do anything you want, also with the invaluable support of family, friends and of anyone willing to help.
The NoisyVisionary People are surely helping a lot. They made my wish come true and it was safe, fun and …a little wet!