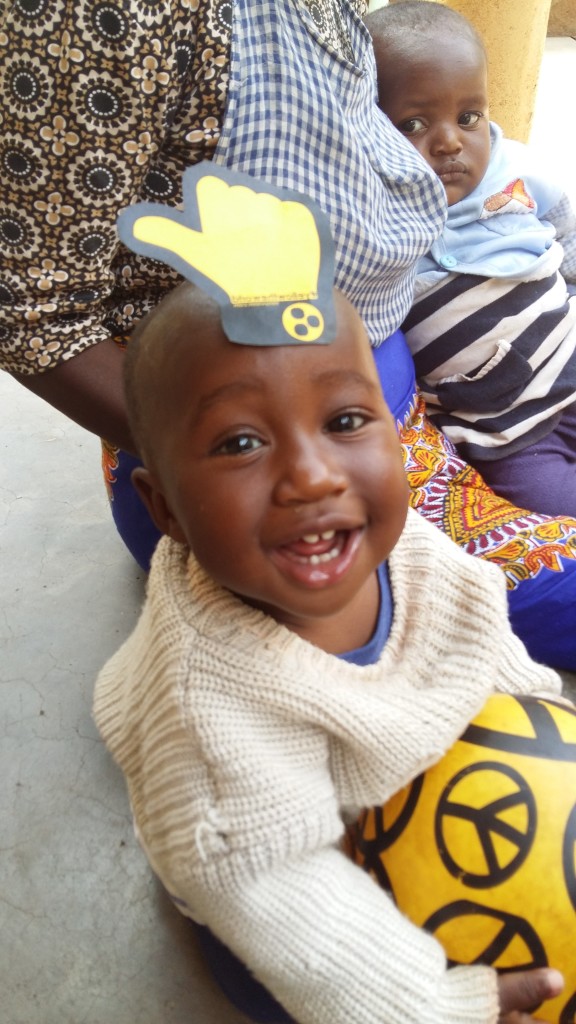 Before leaving for my trip to Kenya last month, I accidentally came across the NoisyVision website. I was intrigued by the big yellow thumbs that sometimes popped out on my wall, so I followed them from Facebook to the site and there I had a look. Not knowing much about the Usher Syndrome, I carefully read the articles and the whole website. In the map on the noisyvision.org homepage, Africa was still very black, so I decided to print some big yellow thumbs and bring them to Nairobi, you never know you can #yellowtheworld also there. When I left my backpack was a bit more yellow!

As soon as I arrived in Kenya, I jumped headlong into the job from day one: taking care of fifty children under 4 years is hard work in any part of the world, let alone in a slum of Nairobi, where there is an extreme short supply of any kind of resources. At the school the toys to play with were very few, not enough for everyone, so it was hard to organize activities that could keep entertained many kids at the same time.
One day they were particularly excited and hyper-active, the teachers and I did not know what to do to calm them, what game was the best to choose. While I was looking at the classes and the kids were running around, I thought that for being a pre nursery school it was really gray, and colors were missing, so I thought about the yellow thumbs in my backpack.
When I entered the class with my hands full of yellow, at first there was not a lot of enthusiasm. It would have been hard to explain them what they were and expecially what they represented. I thought I had wasted time and yellow paper.

However the teacher suddenly took one and stuck it on the forehead of a child, Karanja, the one in the picture. He was the youngest and the cutest, so all the others looked at him, they broke out laughing, and they tried to do the same, take the thumbs and stick it to their forehead. A few minutes later the situation was already out of control, the silence of a few minutes before had turned back into a noisy an happy mess, this time colored with bright yellow, thanks to NoisyVision thumbs. Mary took one, put in it her pocket and would not have let the others play with it, Karanja tried to eat one and Collins chased John trying to reach him with his yellow card.

As I was watching them run with the yellow thumbs in their hands or throwing them to each other, I thought that maybe they will never know what they represent, but we definitely had fun the entire morning and it was well worth it. Even I and the teachers had good laughs. In the evening when the children have gone home and we cleaned the classroom, there were pieces of yellow everywhere on the floor, on the chairs, on the grass in the yard. Maybe the children did not understand what they were those colorful thumbs, but surely they liked it and no doubt at the end of the day we had reached the goal of making the black Nairobi a little more yellow!