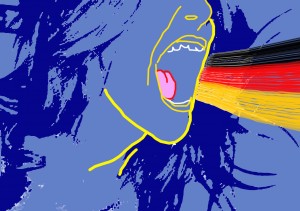 My mother tongue (Muttersprache, I learned today) is Italian, I speak English quite well because I began to study it in school when i was 10 (rather late though) and the teacher in high school hold me in the classroom while my friends were smoking in the bathroom during the break to teach me the exact pronunciation. I couldn’t hear it, aslo because in my teenage I was ashamed to wear hearing aids. And I was saying listen with the st sound well marked, just like a true Italian. Eventually I learned to loosen the tongue and remove it from behind the teeth to say a /lɪsn/ a bit more Anglo-Saxon. Many journeys and many opportunities to use a language I like, have allowed me to learn new vocabulary and improve pronunciation. However I still have many troubles with movies and songs.

Spanish. I understand it, speak it with mistakes that do not preclude the communication, I do not write it correctly. I understand Portuguese and the others understand me But I have no idea what I’m saying.
In both cases, these idioms can be learnet even a hearing loss, words are often similar to Italian and even though I still do not say well the sound çã of comunicação or that a bit nasal of então, to communicate with the Latin American or the Iberians is not a problem.

We come to the German. I told my self: Never!
But now I am sitting everyday for 3 hours at a desk in a school in Berlin trying to say Ich without an s escaping our of my mouth, counting from one to ten as if I had the teeth of lead.
Of course, I’m not the only one. There is a Korean girl who just can not make the sound e of the e of the french mer (I cannot find a similar sound in English)
But trying to learn German with a hearing loss is definitely a feat. Often the teacher looks at me unbelieving when I still do not understand the questions that she already asked about ten other times and turning to the fellow next to me the answer comes without hesitation. Then I cannot hear certain sounds even if they are repeated several times. They are not part of my language.

Patience. I will learn more slowly.
But is there someone who has already been in a situation like this? Any advice?

At www.alldeaf.com they wrote some experiences.